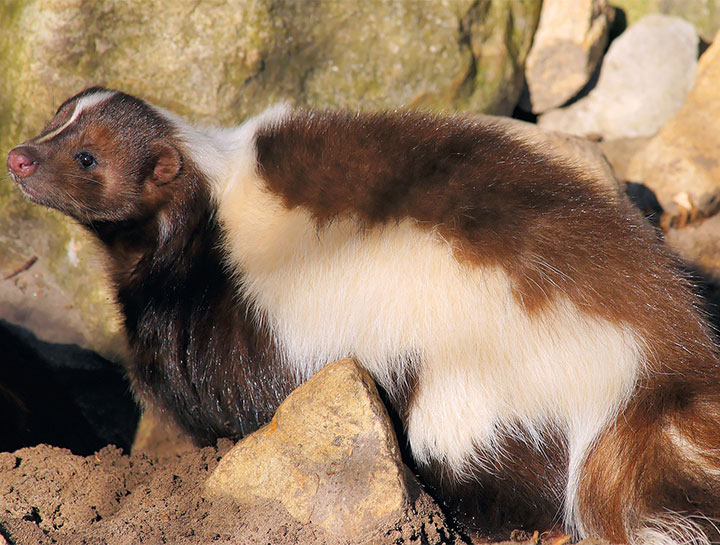 Skunks and Your Pet

Skunks are members of the Mustelidae family (the same family as weasels and badgers), and can be found throughout most of the western hemisphere. The commonly recognized skunks are the striped skunk and spotted skunk, both of which are black and white. Skunks are about the size of a housecat, 6-10 pounds, and are usually solitary. Skunks are nomadic throughout their territory which may be as large as 30-40 acres. Skunks do make dens that they use only rarely – during cold weather and when young are born. The dens frequently change location. Skunks like to den in shallow burrows, hollow logs, beneath buildings, under decks, in dumps and in woodpiles. They are very comfortable even in suburban environments. Skunks are nocturnal and usually begin foraging about sunset. They are omnivores with their diet consisting of field mice, small rodents, lizards, frogs, birds, eggs, garbage, acorns, fallen fruit, and insects.

Skunks rarely attack and their only real defense is a noxious smelling spray. The spray is ejected from the anal glands which are two small glands located on either side of the anus. The contents of the glands may be expelled either as a mist or as a directed stream. The spray is most accurate and effective up to a range of 15 feet. Some components of the spray are not immediately odiferous until mixed with water. Because of this, any components of the spray that are trapped in an animal’s coat will release more of the odor when the animal gets damp. This effect may last for many months after a skunk sprays an animal.

In order to get rid of skunk odor on pets, the chemical components in the spray must be removed from the animal’s coat or chemically altered. Complete physical removal even with multiple baths will not completely remove skunk odor so it is necessary to chemically alter the compounds to completely remove the odor. There are many commercial products available to remove the odor, but if it's late at night when the pet stores have closed, you can use a home remedy consisting of 1 quart of 3% hydrogen peroxide, ¼ cup baking soda and 1 teaspoon liquid soap. The soap breaks up the oils in the skunk spray and allows the other ingredients to do their work. The solution should be rinsed off with water. Do not get the solution in an animal’s eyes or mouth – use a sponge to apply it around the face.

A popular myth is that bathing an animal in tomato juice will eliminate or neutralize skunk odor – it does not. Tomato juice appears to work thanks to a phenomenon called olfactory fatigue. When exposed for a period of time to any odor, the nose will become insensitive to that odor and you will no longer be able to smell that odor. In the case of skunk spray, when this happens, the smell of tomato juice is easily detected and it appears that the skunk odor is gone. While bathing an animal with tomato juice might wash off some of the chemical components causing the odor, it does nothing to chemically alter or neutralize the odor.